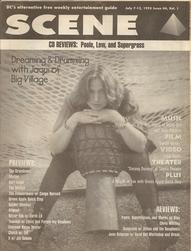 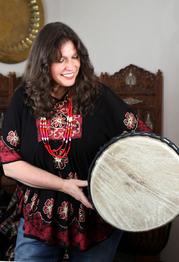 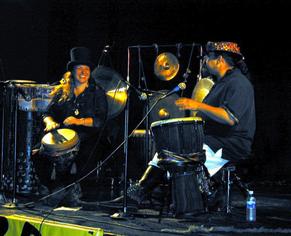 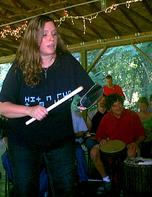 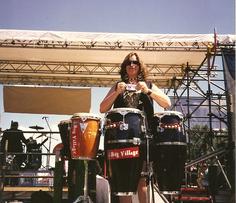 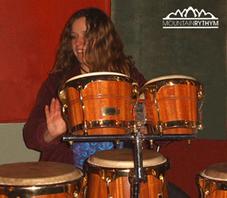 Jaqui and Daveed Korup performing at the 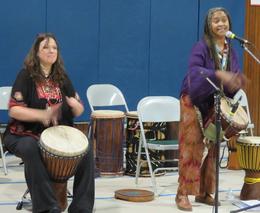 Jaqui and Ubaka Hill, performing at the Baltimore Rhythm Festival 2015 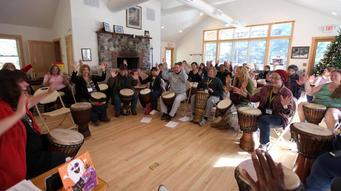 discovered her passion for African drumming in the early 1980’s.  Over a span of 15 years, she studied with many Masters, including Babatunde Olatunji, Mamady Keita, Sam Turner, Carlos Moore and Mahiri Fadjimba Keita at the Tam Tam Mandingue School in Washington, D.C.  Having performed and recorded with some of the top names in the business, she began sharing her joy of drumming with others by teaching classes and facilitating community drum circles. Jaqui has taught privately and given workshops throughout the USA for over 30 years through her program, Drum For Joy!™.  The Washington Area Music Association, (WAMA), awarded Jaqui the “World Music Instrumentalist Award” every year from 1995 through 2002 and she was featured in the Women Drummers issue of DRUM! Magazine.  In 1999 and 2001, she attended the Drum Circle Facilitators Playshop and the Facilitators Mentor Training in Hawaii with Arthur Hull.  Jaqui has facilitated drum circles for hundreds of conferences, corporate team building events, elementary and high schools, hospitals, programs for “at risk” children, juvenile detention centers and programs for homeless and battered women.  She is a founding board member of the Drum Circle Facilitators Guild (DCFG), an organization dedicated to professionalism in the field of drum circle facilitation.  As a former endorsee of REMO and Mountain Rythym Percussion, Jaqui represented the companies as a guest facilitator at Summer NAMM in Nashville, TN, at the Percussive Arts Society International Conference, (PASIC) in Nashville and Ohio, and as a workshop leader at the Seattle World Rhythm Festival. After twenty years in Washington, DC, Jaqui moved to Westminster, MD where she created Magnolia House Studios. She is also an award winning and published visual artist who enjoys painting and teaching art in a variety of mediums. Jaqui believes in the healing power of art and music.